Get Into The Spirit Of The P&O Ferries Dalriada Festival

Marquees, generators, lighting, fencing, staging – with just over a week to go it's all hands on deck for staff and community volunteers as Glenarm Castle and Village gears up for one of Northern Ireland's biggest cultural family events - The 5th P&O Ferries Dalriada Festival in partnership with UTV, 18 - 25 July. After months of preparation it is anticipated that thousands of visitors will travel to Glenarm to take part in a very unique experience. If you are making you way to the festival this year then check out these interesting facts which will help get you into the festival spirit. 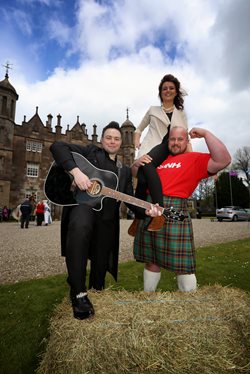 "It is hard to believe that the 5th P&O Ferries Dalraida Festival is almost upon us. We say it takes months of preparation but we are already planning next year's festival which will also be a landmark year at Glenarm Castle as it will be the 20th year of the Highland Games. We are very proud of our festival and it is testament to the hard work and commitment of our staff, volunteers and the people of Glenarm that thousands of visitors participate and leave wanting to return the following year. Our partners and sponsors, P&O Ferries, UTV, Tourism NI plus many more, are an essential part of our festival family and it is thanks to them that we continue to deliver a diverse and ever expanding programme every year. Every year we are building and striving to be better than the next and this year is no exception. We cannot wait to welcome all our visitors and hope that they will join us for our landmark year in 2016.